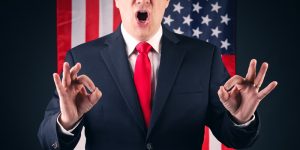 Your book, Crucial Conversations, suggests that we are more effective if we express ourselves “tentatively” and encourage others to challenge our views. But many leaders (Jack Welch, Donald Trump, etc.) are the opposite—forceful and even dogmatic. And yet, they are very successful. I can’t remember either of these men speaking “tentatively” or encouraging others to share their divergent views. So do crucial conversation skills only work in some cases? Why do some reach the top in spite of doing the opposite of what you teach?

I am not going to weigh in on specific personalities (Welch, Trump, or other public figures) . . . but it’s funny you should ask this question.

Just prior to the election, we did an interesting experiment that illustrates the answer I’ll offer to your important question.

The results stunned us.

Those who watched a dogmatic person who agreed with them rated them as far less intelligent, likeable, and persuasive than someone who disagreed with them—but disagreed reasonably. And the differences were not subtle—those who presented their views with passionate respect were:

So how do you explain this? If a respectful approach to communication makes this profound a difference in how people perceive you, how could someone rise to power by doing the opposite?

Part of the answer, I believe, lies in how we introduced the video to our subjects. We did not say, “Watch this person on television.” Instead, we said, “Imagine this is your coworker who is trying to engage you in conversation . . . ”

National politics is more about performance than relationship. Performance is monologue not dialogue. It must be brief, simple, and memorable. Relationships are none of these. They require dialogue. Conversations are often lengthy, nuanced, and messy. The way we framed our video experiment placed it in the context of an office relationship.

It turns out that the rules that govern memorability are different than those that generate a sense of connection and trust. Conflict and repetition promote memory. So, in political performance, we need a foil or antagonist to create a sense of conflict. We dramatically juxtapose our view with that of the antagonist. And we repeat the same simple dictum ad nauseum. In this context, exaggeration increases effect.

But imagine someone trying that in conversation! It wouldn’t work. You’d walk away. They would rupture relationships. In fact, we saw the breakdown of relationships during this last political season as people attempted the same grandstanding gestures they saw played out on the nightly news in social media or in office conversation. Bad idea.

Interestingly, even politicians and larger-than-life business leaders must be bilingual in this respect—or they will pay a price. There’s a difference between winning a campaign and building an organization—or relationship. We’ve studied the latter for three decades and can say unequivocally that if you attempt to use political performance skills in the sustained relationships of your life, you’ll pay an enormous cost.

Does that mean you’ll fail completely if you violate respectful communication practices? No. Because success is not about a single variable. But it does mean that you’ll fall short of the success you could have had if you had managed this one variable better. Some succeed in spite of their weaknesses, but rarely because of them.

Interestingly, one of Jack Welch’s most coveted cultural goals was to build a culture of candor. He knew that an organization that doesn’t habitually speak truth to power is doomed to suffer for the lack of it. My guess is his public persona was different in some ways than his interpersonal approach.

I hope this distinction helps you decide which habits will create the life and results you want most.